This article, regarding PRV change out challenges, first appeared in the 2015 May/June edition of Propane Canada Magazine.

As a consultant, I often get asked by clients to look at the risk associated with performing certain tasks and to advise on what is the best way to complete those tasks. I was recently asked to look at the processes and training skills required for a company to successfully meet their regulatory obligation with respect to the replacement of pressure relief valves (PRVs) in consumer propane tanks.

My review of this subject has led me to the conclusion that this is most likely going to be the most challenging regulatory requirement the propane industry has faced in its history.  This single requirement will put a tremendous strain on the industry’s resources, people, equipment, and finances.

Now that the regulatory requirement is in place to change out the PRV, it is time for serious discussion on how this is actually going to be accomplished.

When one talks about the replacement of a PRV in a propane tank, there are three basic steps:

These three steps sound fairly straight forward until one gets into the details of how this is going to occur.

The majority of consumer propane tanks are not equipped with an easy method of removing the propane liquid from the tank.  A limited number of tanks are equipped with a liquid withdrawal excess flow valve (Chek-Lok) mounted on top of the tank with a dip tube, or directly into the bottom of the tank that can be used to remove the liquid propane from the tank.  If the Chek-Lok does not work properly, then you are back to the situation of how to remove the liquid from the propane tank.

One method is to use a flare stack to burn off the propane within the tank.  Depending upon the quantity of liquid propane in the tank, this is quite a time-consuming process that does not lend itself to being conducted at the customer’s location.  Can you imagine flaring off a propane tank in the customer’s backyard?  The flare stack creates a large flame and a lot of noise; not the type of situation that would make the public feel safe in their own homes.  Also, you would have to notify the local fire department, who may want to attend, which is not a good scenario overall.

Another option for evacuating the tank, which has been brought to my attention is the use of tank rollers to roll the tank so that the vapour space now becomes the liquid space.  There is an adapter that can be connected to the fill valve to ex-tract the liquid propane by gravity from the tank to a pump to fill the new tank. This method requires the tank to be elevated so that the necessary fittings and connections can be completed.  Unfortunately, this practice also puts the PRV in the liquid space, so if the PRV does activate for any reason, the liquid will be released to the atmosphere creating a rather dangerous scenario. 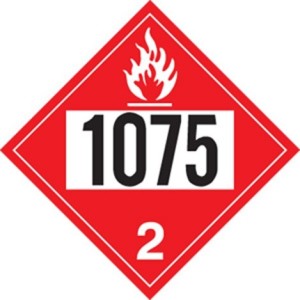 One of the major hurdles is the Transportation of Dangerous Goods requirement which only allows consumer propane tanks to be transported with a maximum liquid volume of 5%.  This means that to transport a propane tank from a customer’s location to a location where the tank can be evacuated prior to PRV replacement, its volume must be less than 5%.  Update:  In 2016, Transport Canada issued an Equivalency Permit allowing members of the Canadian Propane Association to move tanks up to 500 USWG with more than 5% directly back to the propane bulk plant for evacuation under a number of conditions.  While helpful, the permit creates other issues related to the transport of the tank since it will have to be secured on proper cradles to prevent movement of the tank and damage to the feet.  Tanks larger than 500 USWG will still have to have the contents reduced to 5% or less of maximum capacity.

It’s also important to note that Alberta Transportation once had a permit which allowed movement of ASME tanks to be moved with more than 5% capacity within the oil-patch.  This permit was ultimately revoked due to flagrant misuse of the permit.  Incidents involving misuse of this permit may result in revocation of the Equivalency Permit.

One option is to allow the customer to use the propane in the tank so that the liquid level is below 5%. This approach is not a feasible way of reducing the pro-pane liquid volume to a point where the tank can be transported since the scheduling of the tank’s replacement will have to be carefully orchestrated so the customer does not run out of propane.  Trying to schedule 30,000 propane tank replacements on an annual basis under this process seems to me to be quite a daunting task.

The Magnitude of Meeting this Regulatory Obligation

There are approximately 750,000 propane tanks in Canada, which means the industry will have to exchange 30,000 propane tanks on an annual basis.  Given that at best, one can expect to conduct this type of work during the 6 to 7 month period of April to October, this will require 4,285 tank exchanges per month.

These numbers are based on every PRV having a 25-year change out as required by regulation.  Unfortunately, the industry is faced with the problem of replacing PRVs which have currently been in service for 25 years or more, and playing catch-up to get to a position whereby the 4,285 tank exchanges per month can be completed.  I don’t think anyone has a handle on exactly how many propane tank exchanges will have to take place on an annual basis for the industry to become current with this regulatory requirement.  Every company will have a different schedule based on the age of tanks in operation.

The CSA B51-14 Boilers, Pressure Vessels and Pressure Piping Code requirement for the replacement of PRVs does not provide for a phase-in period to allow the industry to deal with the existing PRVs that are currently in service longer than the stipulated change out times.  This means that industry members will have to go to each provincial jurisdiction to work out a schedule of replacement so that PRVs in service beyond the change out times can be left in service until such time the industry can deal with them.  If some type of change out schedule is not put into place, then the moment that the CSA B51 code is adopted in the province any PRVs that are in service beyond the time limits specified in the code would be considered non-compliant.  The fuel supplier cannot supply propane to a non-compliant installation.

In looking at the certification and Records of Training (ROTs) required to change out a PRV in a propane tank, one must consider working with both liquid and vapour propane, which can require separate training certification.  The specific level of Propane Fitters Certificate required will be dependent upon the provincial requirements.  Provinces have different descriptions for the levels of Propane Fitters Certificates and what the certif-cate holder may do.  However, when handling liquid propane, a certified pro-pane fitter must also have a liquid propane (LP) endorsement attached to the certificate.

Remember, you cannot legally release propane to the atmosphere unless it is done as part of the transfer process i.e. through the fixed liquid level gauge.

If the customer’s propane tank is to be brought down to 5% or less liquid volume to permit it to be transported back to a central location and a replacement tank installed, it will require the person(s) to have the following certificates and ROTs:

Once the customer’s propane tank is back at a central location for the PRV to be replaced it will require the removal of the remaining liquid and vapour propane in the tank so that the tank’s interior pressure is 0 psig.  Again in most jurisdictions, this will require the services of a certified propane fitter with an LP endorsement.  Some jurisdictions will permit a person holding an ROT for the operation of a propane plant to transfer the liquid and vapour propane out of the tank.

Since this article was first published in Propane Canada magazine, the Fuels Learning Centre has developed a comprehensive training course covering all the aspects of evacuating propane from the tank and how to operate the equipment required to conduct the evacuation.  Regardless of where the evacuation occurs (customer site or at the propane bulk plant), our Evacuating Propane From Consumer Storage Tanks (SO03) course provides all the necessary instruction for employees involved in the process.

Another issue for discussion is that by removing the PRV from a propane tank you are exposing the interior of that tank to the atmosphere.  The regulations currently in place stipulate that if the interior of a propane container is exposed to the atmosphere, then it must be purged.  The regulations do not stipulate any period of time, so in essence, once the PRV is replaced, the tank should be purged.

To address this issue, testing is required to determine that if air does enter the tank during the PRV replacement, will the limited quantity have any effect on the operation of appliances connected to the tank.

Achieving Compliance Will be a Strain on Resources

In addition to staffing being a major concern, I also see challenges regarding the acquisition of equipment required to simply change out a PRV.  This includes the purchase of replacement PRVs and careful scheduling of crane trucks, tank trucks, tank moving equipment, compressors, pumps and flare stacks.

In conclusion, this single regulatory requirement has a tremendous mushrooming effect in that there will be mandated up to 30,000 more propane transfers and approximately 60,000 more propane tank transports down our highways on an annual basis.  The industry’s actual experience of PRV failure is nonexistent, with only one reused PRV failure in 25 years as we discussed in our Knowledge Base article entitled “History of PRV Service in Canada“.  One must question the increased risk of additional transfers and transports versus actual experience.